PANORAMIX successfully demonstrated its core technology at the 10th International Conference on Computers, Privacy & Data Protection (CPDP) in Brussels on the 26th of January 2017.

The demo consisted of an educational video (view here) –shown on a large TV screen– explaining the overarching idea of PANORAMIX and its applications. In addition, a private anonymized chat room developed by GRNET was presented. Conference participants were able to see live how messages can be broadcast anonymously, without allowing an eavesdropper or even legitimate users to figure out which user sent which message.

Figure 1 illustrates a user connected to a private chat room called “panoramix”. The user initially submitted the message “Hello world”, but their message did not become visible until four more messages were submitted by other users. After the submission of all five messages, a Sphinx [1] decryption mix net was employed to shuffle the messages, which were then printed in the chat room in a random, untraceable order. An attacker that performs traffic analysis on the network cannot link a message to its sender. Figure 1: A user connected to the private chat room “panoramix”.

Two laptops were set up at our kiosk (Photo 1). The first one was connected to the chat room (Photo 2) and the other was showing what was going on in the background:

People visiting the kiosk could use the chat room simply by scanning a QR code; they then could enter the chat room and submit their messages, which were mixed and displayed along with the messages entered by other visitors. 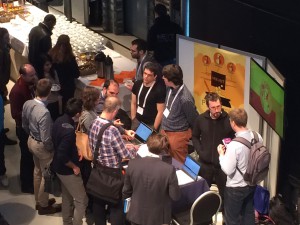